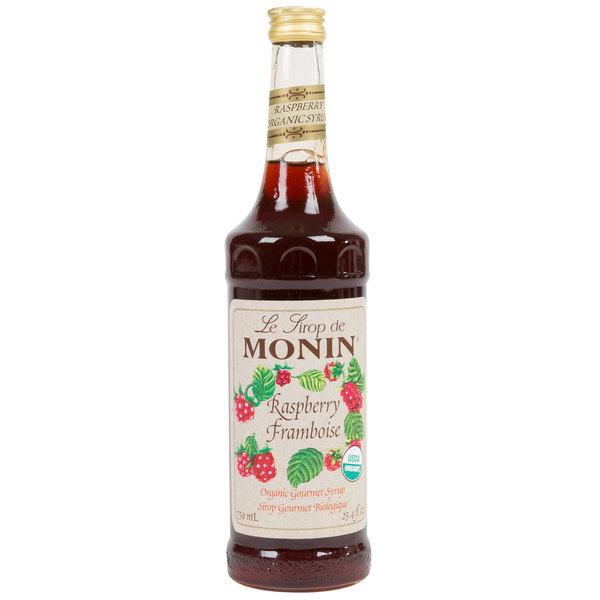 It looks like a ring formed inside the neck of my syrup bottle. Is this normal and still safe to use?
It is not uncommon to see this, but the manufacturer assures that this is not mold and it is not harmful. It can be caused over time from an oil separation in the syrup ingredients. It doesn't pose a food safety risk or alter the taste of the syrup.

Make naturally-delicious beverages containing organic ingredients with this Monin 750 mL organic raspberry flavoring syrup! This syrup is sweetened with organic cane sugar and does not include additives or preservatives. Add a splash of this raspberry syrup to your fresh-brewed coffees and teas and it's sure to please your guests. Use it to create Italian sodas, cocktails, lemonades, and more. Featuring the juicy, fresh taste of red raspberries, this syrup will enhance the flavor profile of your drinks without overpowering them or being too sweet.

Packaged in a glass bottle, this organic flavoring syrup makes an excellent addition to any restaurant, bar, coffee shop, or cafe. It boasts a sleek appearance for an attractive shelf presence and can easily be paired with a compatible pump for quick, efficient service during peak serving hours.

Since 1912, Monin has had a passion for delivering premium products that simplify the beverage-making process. Their sense of innovation and creativity has led to a wide variety of flavors and recipes to suit any menu. Use this Monin organic raspberry syrup to craft superior beverages for your guests!