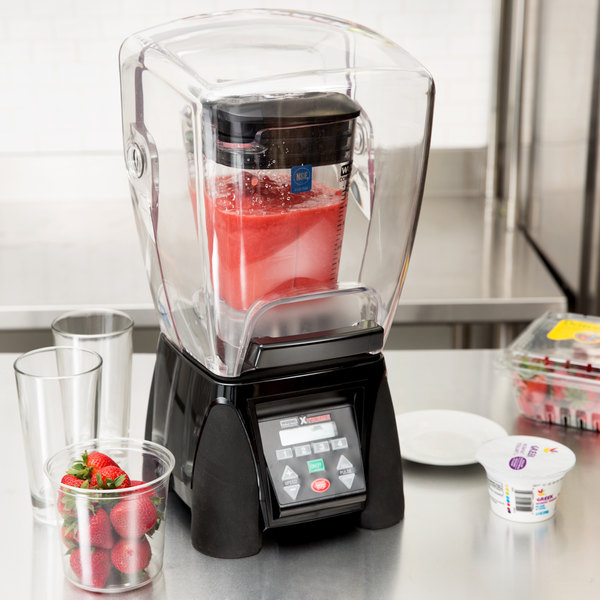 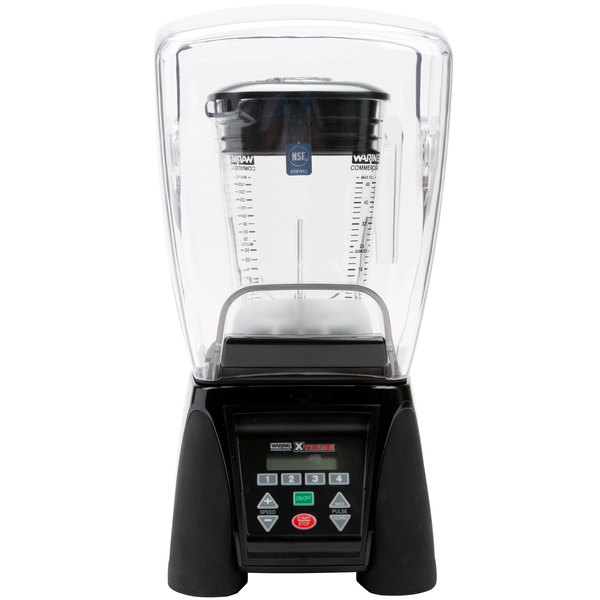 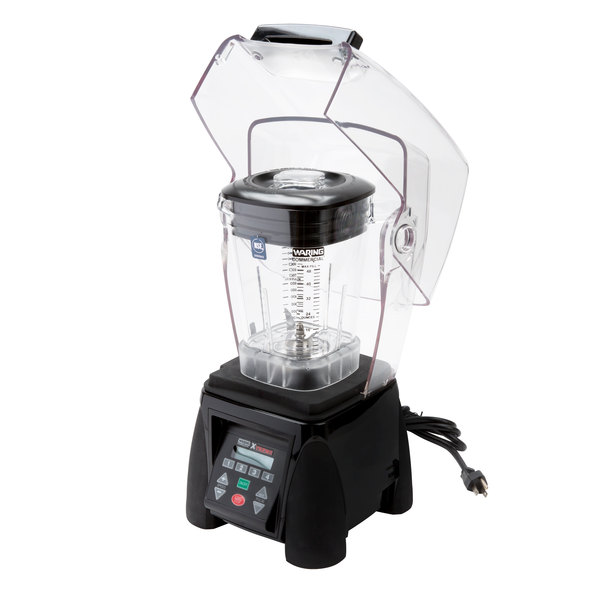 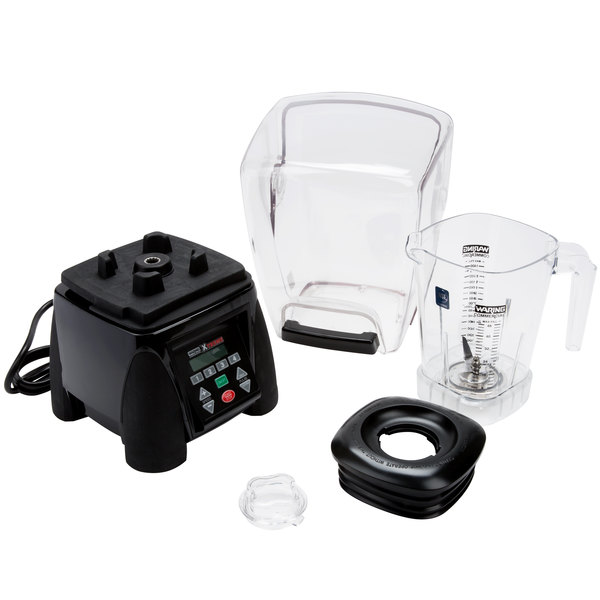 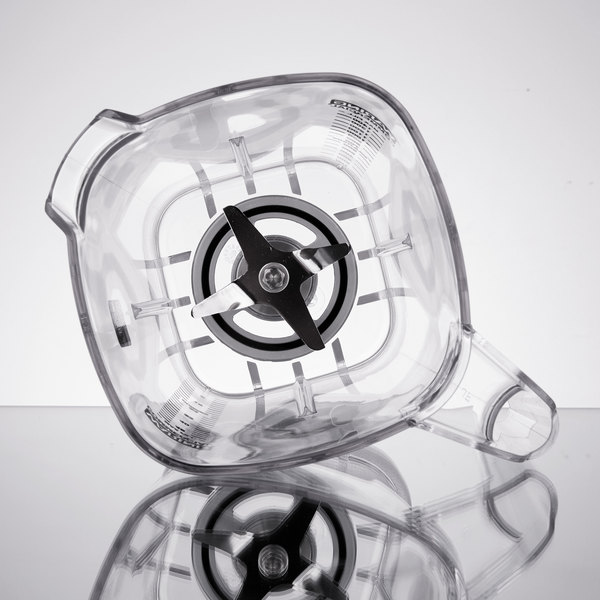 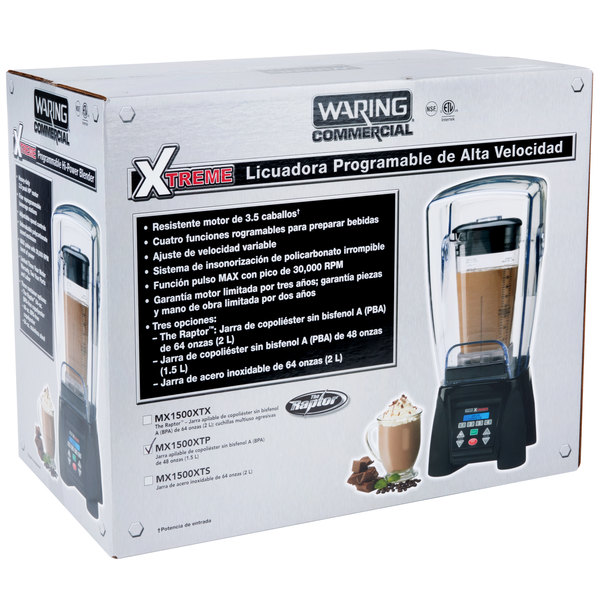 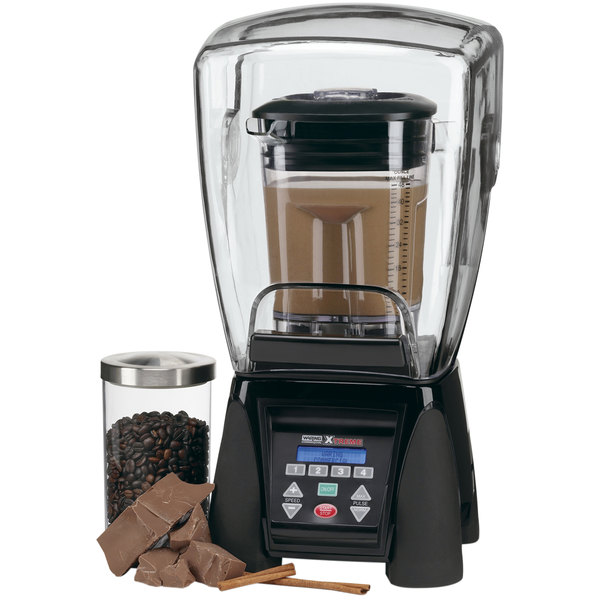 The MX1500XTXP features a powerful 3 1/2 hp motor for fast, efficient blending, while the included sound enclosure allows for quiet operation that won't disturb your guests! You'll be able to blend well over 75 drinks a day, making this blender perfect for busy smoothie shops, bars, or even healthcare institutions and schools. Whether you're crafting a signature frozen cocktail, or pureeing a velvety soup, the Waring MX1500XTXP Xtreme commercial blender will give you smooth, consistent results in a flash!

"This blender has been great since we first took it out of the box! We use it in our frozen yogurt shop to make smoothies. The programmable function is easy to set and makes the whole process easy! I would recommend it to anyone looking for a high power machine."

The blender's keypad features an incredibly intuitive design that gives you total control over your creations. Speed can be adjusted in 1% increments from 15% to 100%, while normal and maximum pulse buttons provide you with a temporary boost of speed when you need it. There are 4 program buttons preset for liquid drinks, frozen drinks, ice cream drinks, and smoothies, with the ability to be reprogrammed to suit your needs.

Equipped with a heavy-duty polycarbonate sound enclosure, the MX1500XTXP is perfect for front of the house applications when noise reduction is important. The included sound enclosure allows you to blend your creations without fear of noise disrupting customer conversation or orders. The enclosure is break resistant, easy-to-remove, and dishwasher safe.

The included 48 oz. BPA free copolyester container has capacity increments clearly marked so that you measure and pour the perfect serving sizes.

The lid creates a seal with the jar so no liquids seep out during operation and features a removable pour cap so you can easily add ingredients.

Can I blend frozen fruit?
For the best results we recommend blending only fresh or partially thawed frozen fruit. Your frozen drinks will be smoother and you will extend the life of your blender. Blending fully frozen fruit could damage your blender and void the warranty.
What is the proper technique for cleaning my blender jar?
Due to the metal construction of their drive components, blender jars are a hand wash only item. They should not be run through a dishwasher, and care should be taken to avoid directly spraying the bottom of the container with a high pressure pre-rinse faucet. For best results, clean the bottom of the jar with a washcloth and a mild detergent or sanitizer when needed.

Find out how easy it is to program Waring's MX1500 series of blenders, and also learn about all of the innovative features and accessories that make this one of the premier blenders in its class. Check out this video to learn more!

Transcript Embed
Hello and welcome to another instructional short from Waring Commercial. Today we're going to be focusing on the MX1500XT. This is the most powerful blender in its class at 3.5 peak hp, it's also the fastest blender in its class at 30000 max RPM. Today we're going to show you a lot of the features, you have adjustable speeds on this unit, you have 4 re-programmable beverage stations, you have a maximum pulse, you have a re-programmable normal pulse. You have a drink counter, and it comes with this large, polycarbonate sound enclosure which reduces the noise by about 30%. Right now we're using the 64 oz. jar - you also have stainless steel options and a 48 oz. jar available to you. Now I'm going to show you some of the features on the control panel, and show you how easy this thing is to program. So if you take a look down here, we're going to program a smoothie recipe in here. First you push the speed up and speed down buttons, you're going to push #1 to get into the new programming session, and now I'm going to set the speed for a basic smoothie recipe. We're going to start with 40%, we're going to use the max pulse button to enter to the next segment, and we're going to set the time at 7 seconds. Max pulse again, we're going to select our second speed, which will be 70%. As you can see you hold the speed button down, and the speed scrolls through very quickly, so this is a simple process- no computers needed, no nothing. You're doing it right on the control panel. Now we're going to set the last segment at 100%, we're going to put that on for 10 seconds, and we're going to run a 25 second smoothie and it's going to be fantastic, the most delicious you'd ever taste if you were here with me. Push speed up and speed down to save it, and now you've got program #1 saved with your specified program. I'm going to show you a delicious smoothie recipe, just put some frozen strawberries in, a lot of them. Put a little yogurt in there for some flavor and some protein, delicious! We'll throw some bananas in there, probably one whole banana. And then we're going to add our orange, strawberry, and banana mix. Very nice, it's about 32 oz. 30 oz. We'll save a little for later. Cap it off, and we're going to throw it on. I'll show you the sound this unit makes and the sound it reduces with the sound enclosure. We're at segment #1 now. You can hardly hear anything, we're at segment number 2, right now you heard the speed just kick up, and when the sound enclosure is closed, you can hear everything I say. It's really fantastic. Now we hit the 100%, we've got about 4 more seconds, and you've got the smoothest smoothie you've ever had. Fantastic! Obviously very simple to program, makes delicious smoothies in no time at all. This is the MX1500XT from Waring Commercial, thank you very much.

Resources and Downloads for
Waring MX1500XTXP