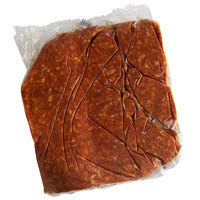 Try this Fontanini 5 lb. Spanish-Style Chorizo - 4/Case instead! With similar benefits and features, this item is an ideal alternative to your current item.

Frozen and refrigerated items cannot be shipped outside of the United States.

Give your customers a taste of the ancient culinary traditions of the Iberian peninsula with this Don Juan dry-cured Iberico chorizo! This product is made from the meat of black Iberico hogs, a heritage breed of pig that has been raised in Spain and Portugal for approximately 10,000 years. These pigs roam on lush, green farmland and are fed a diet of acorns that gives their meat a uniquely rich and delicious flavor. To make this chorizo, the butchers at Don Juan hand-select the finest cuts of lean Iberico ham and grind the meat in a large grinder before blending it with salt and lightly smoky paprika, a traditional flavoring for Spanish chorizo. This mixture is stuffed into natural casings, then tied and left to cure for a minimum of 60 days. During this curing period, the chorizo develops a richly complex, mildly piquant flavor that prominently features the distinctive taste of Iberico ham. The final result is a strikingly red salami that is practically bursting with the flavor of centuries of Iberian gastronomic tradition!

This Iberico chorizo is a perfect addition to a Spanish-inspired tapas cheese plate! This product comes pre-sliced, saving you valuable time in your busy kitchen. Serve it alongside other traditional Spanish meats like Serrano ham or Salchichon salami, as well as Spanish cheeses like rich Manchego or distinctive Mahon. Adorn your cheese plate with other Spanish delicacies like salty queen olives, buttery marcona almonds, or sweet quince jelly, and serve alongside a glass of rich Spanish red wine like Rioja or Jumilla - as they nibble and sip, your patrons will feel as though they are being warmed by the rays of the Spanish sun! You can also try including this chorizo in a traditional and flavorful paella, or slicing it thin and including it in rich, Spanish-inspired pasta dishes. No matter how you choose to serve it, this Iberico chorizo will make a deliciously traditional addition to your menu!

Since 1999, Don Juan has been committed to honoring the legacy of traditional Spanish delicacies through careful production using time-honored methods. Each of their products is a love letter to the delicious flavor that comes from pride, careful craftsmanship, and patience. When you serve Don Juan products, your customers will fall in love with the rich traditional flavors that envelop their senses and engage their imaginations!