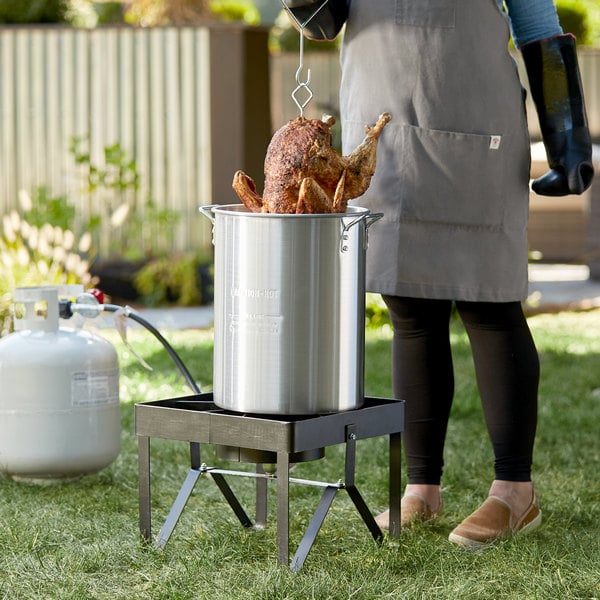 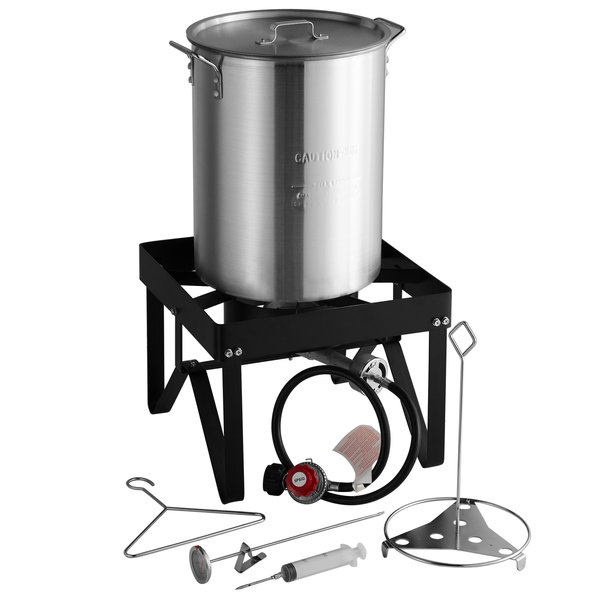 The Backyard Pro 30 qt. turkey fryer kit comes with everything you need to fry up a large turkey!

This Backyard Pro 30 qt. aluminum turkey fryer kit features a stock pot made of durable 18 gauge aluminum for optimum heat conduction. An included 5 PSI adjustable regulator and rubber hose make it easy to hook the burner up to your existing propane tank and start frying turkeys up to 20 lb.!

"The Backyard Pro 30 Quart Fryer Kit is great. It includes everything you need to get started. You can even fry chickens, turkey's ect. It is easy to assemble, and easy to clean. the price is great to."

Deep frying your turkey is the best way to seal in all of the natural juices without making the bird greasy or fatty. Plus, it makes for a great atmosphere at barbecues, fairs, and other outdoor events!

A solid foundation for your stock pot is important when you're frying outside. This kit features a durable, powder-coated rolled steel stand to make sure the boiling contents stay inside where they belong.

A 5 PSI adjustable regulator and rubber hose ensure steady fuel flow from your existing liquid propane tank to your burner for efficient, consistent results at your outdoor events.

The long probe thermometer measures from 100-750 degrees Fahrenheit, and it comes with a clip to secure it to the side of the pot. A 1 oz. marinade injector allows you to impart your signature flavors.

The included poultry rack holds your bird in place to ensure even oil distribution for a perfectly fried finish every time. The bottom is perforated, providing convenient drainage when you lift your turkey before transferring it to your cooling station.

Working with hot oil always adds risk to your standard cooking tasks, but the included lift hook makes removing your freshly fried turkey as safe as possible. Remember to always wear your protective gear when using a fryer. Avoid bare skin exposure and exercise caution at all times.

My business is at a high elevation; does this change anything when I order gas cooking equipment?
Many gas equipment manufacturers need to make adjustments to the equipment so it operates correctly at elevations over 2,000 feet. Sometimes we can special order from the manufacturer and have your cooking equipment delivered ready-to-go, but in cases where your unit is in stock and waiting to ship, you’ll need to have a qualified service technician come to your location and alter your unit at the time of installation so that it is compatible with a higher elevation. Contact our Special Orders team prior to placing your order, and we will let you know what will work best for the equipment you are planning to purchase.
What regulators are available for use with this product?
This model comes standard with a 5 PSI regulator. If you need a replacement regulator or if you would like a 10 PSI regulator to increase burner performance, those items can be found by clicking the "Looking for Replacements" banner on this product page.
Why would the paint on my burner/range come off after the first use?
This is normal for painted outdoor ranges, During initial start-up and first use, you may experience some burn-in of the range that includes unpleasant fumes and discoloration of the burner. This process is typical, and after 10-15 minutes the unit will be ready for use.

How To Deep Fry A Turkey

Safely deep fry your holiday bird with these easy-to-follow and steps, and be sure to check out our step-by-step directions for more tips on How to Deep Fry a Turkey.

How to Deep Fry Ham

Deep frying a ham provides a delicious flavor and crispy texture that you and your guests will love! Learn how to deep fry a ham with this step-by-step guide.

Transcript Embed
Frying a turkey is a fast, fun, and tasty way to make your Thanksgiving bird! It can also be potentially dangerous. In this video, we'll show you how to fry your turkey safely. There's two questions when it comes to oil when you're frying a turkey, and that's what kind and how much. As far as what kind, I recommend peanut oil. Peanut oil has a high smug point, so it's going to last longer. It's also not going to give your turkey any off flavors. As far as how much oil to use, the nice thing about this turkey fryer pot is it does have a max fill line. The most important thing is to know you need enough oil to cover your turkey, but not so much that it spills over and creates a fire. One way to be extra sure you've got the right amount of oil is to take your turkey before you cook it and place it in the fryer pot. Fill it with water until it covers the turkey, take the turkey out, and take note of where that water comes up to. That's how much oil that you need. With the particular turkey that I have today, I know I'm going to fill it to the max fill line. Once you've filled your pot with oil, you'll want to put it on your burner. Make sure you already have your burner set up according to the manufacturer's directions. I typically have the flame very low at this point when I put this on the burner, and then turn it up. You can adjust the air intake to get as blue of a flame as possible. On a windy day like today, it's not uncommon to have some yellow flame. Now, I'm going to go ahead and take my oil thermometer and place it on the side of the pot. Make sure the tip is covered in oil and also not touching the side of the pot. We're going to want that oil to get up between 325 and 350 degrees. One of the most important things when you're frying a turkey is to make sure you're frying a completely thawed bird. Make sure your turkey is completely unfrozen or your could have an oil boil-over. That's the last thing you want because that'll start a fire. The other thing you want to do is make sure that your turkey is completely dry. Again, oil and water don't mix, they tend to bubble up, and they can cause a boil-over. Next thing I'll do is cut off any excess fat that's on this turkey. You'll also want to make sure there's a hole in the top here where the neck was to make sure you can get your lifter through it. The next thing I'll do is cut a slit in front of each leg and that'll allow any excess oil to drip out when I pull the turkey out of the oil. The next thing you'll want to do is season your bird. I'm using salt and pepper and Regal Spice's Cajun spice and skillet seasoning. In addition, I'm going to use cajun Injector creole butter recipe as the marinade. When you're injecting your turkey, you just want to hit it in several places in the thick parts of the meat. Now, we're going to put it on the lifter and then wait for our oil to get up to temperature. Just like so, you can see how that will work. As you can see, I'm wearing heavy-duty fryer gloves. Safety equipment is very important. You'll see why when I start dropping the bird into this fryer oil. In addition, a fire extinguisher is always a good idea. I'm going to take the thermometer out while I load the turkey into the fryer. When I'm done, I'll replace the thermometer. Now, when you're putting the turkey into the fryer, the slower you go, the better. This will help prevent a boil-over. It should take a full minute for you to dunk this turkey into the fryer. I generally let the turkey fry for about three and a half to four minutes per pound. Next, I'm going to go ahead an put that thermometer back in there so I can keep an eye on the oil temperature. Okay, I've fried this turkey for about three and a half minutes a pound. I'm going to go ahead and take it out. First thing is I'm going to take out the thermometer so I don't knock it out and I'm going to gently lift this out of the fryer. Remember, you have that cavity that's going to hold a lot of oil and you'll want that to seep out before you bring it out over the flame. Oh, look at that crispy skin! Now we just want to check the temperature of the turkey. We want it to be at least 165 degrees. There we go!

Copy and paste the embed code above.
Transcript Embed
A lot of people deep fry turkeys around the holidays, but what about a ham? Deep frying a ham provides a delicious flavor and crispy texture that you and your guests will love! To begin, mix together 2 teaspoons of onion powder, 1 teaspoon of garlic powder, 2 tablespoons of dark brown sugar, 1 tablespoon of Coleman’s English mustard, and 8 ounces of apple cider until dissolved. Using a marinade injector, add the prepared mixture to the inside of your ham, injecting it in different areas to provide an even distribution of flavor. After injecting as much of the mixture as possible, use a lint-free towel to thoroughly dry the outside of the ham. It’s important to dry the ham as much as possible to keep the oil from boiling over. Next, carefully cut a slit through the ham and slide the ham over the poultry rack to keep it in place. Once your fryer is prepped and the oil is heated to 375 degrees Fahrenheit, slowly lower the ham into the fryer while ensuring the oil does not overflow. Cook the ham for about 7 minutes per pound and until the internal temperature is 160 degrees Fahrenheit. Carefully, pull the ham out of the fryer and give it a few minutes to cool and drain off excess oil. The flavorful ham is now ready to be carved and served!

View replacements or accessories for this item