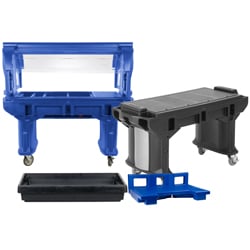 Salad bars and work tables are perfect for displaying salad ingredients at your restaurant or catered event.

Cold crocks, pans, and bain marie jars are just some of the salad bar inserts we offer.

From ladles to slotted spoons, we carry all the salad bar utensils you need for your business.

Salad bar accessories, like tray rails and casters, can improve the functionality of your salad bar.

Keep your foods safe from germs by installing sneeze guards on your salad bars.

Whether you have a portable or table top salad bar, we carry the parts and accessories you need to repair and improve your existing unit.

Placing your beverages on an in tubs, buckets, or pails is an attractive method of showcasing your food and drinks.

How to Start a Buffet

Buffets are a popular type of restaurant in the United States, and you can find buffets all over the country serving a variety of foods. Buffets are different than other types of restaurants, though, due to the amount of food they have to produce, which presents many unique challenges. As a result, there are some differences when opening a buffet as opposed to opening a traditional restaurant . We'll break down everything you need to know, such as how buffets make money, the different types of buffets, and the 8 steps you need to complete to open a buffet restaurant. What Is a Buffet? Buffets are a type of restaurant that offers a fixed price, and then allows customers to fill their plates with food and eat as much as they like. Buffets may also be referred to as "All You Can Eat" restaurants. Most buffets also have a theme that they use for their menu, such as buffets that specialize in Chinese or Indian food. Some buffets are also affiliated with hotels, and this type of buffet is especially popular in Las Vegas or casinos. Types of Buffets If you've decided that you want to open a buffet, your first step is to choose a concept for your establishment and a theme for your food. There are many different types of buffets, but some are more popular, and profitable, than others. Here are some of the most popular types of buffets: Chinese Buffets: This is one of the most popular types of buffets because there are many different recipes that you can use and there is flexibility with the price point. Indian Buffets: Another common type of buffet are Indian buffets. Buffets are crucial to Indian cuisine, and India is considered the originator of the all you can eat buffet, which explains their prevalence. A benefit to opening an Indian restaurant is that some Indian dishes are very filling, so you can satisfy your customers with smaller portions, boosting your profits. American Buffets: This type of buffet is very popular in the United States, and there are many popular ch

Whether they’re taking home leftovers or purchasing food in disposable packaging, your customers need reliable food containers to maintain safe temperatures, prevent leaks, and keep food sanitary. By investing in take-out food containers , you can diversify your services, menu, or display shelves to increase your profits.

Types of Fruit and Vegetable Slicers, Cutters, and Dicers

Few things can "wow" in a commercial kitchen as much as an experienced chef using impressive knife skills to slice, dice, chop, and otherwise process fruits and veggies. The problem is, not every foodservice operation that needs to process fresh produce has someone so capable on-hand round-the-clock, and for those that do, their time may be better spent on other tasks. Fruit and vegetable slicers, cutters, and dicers make that a concern of the past by allowing even the most inexperienced workers to produce consistent, quality cuts that ensure customer expectations are always met, portions are easily controlled, and food waste is reduced to a bare minimum!

Stock Your Establishment with Necessary Salad Bar Equipment and Supplies

We carry all of the salad bar items you need to have a smoothly running salad bar. Our sneeze guards keep germs out of the food, while our food bar covers keep your equipment clean and free of dust when it’s not in use. We also carry portable salad bars of all sizes so that you can offer your full spread anywhere. Read more

Our selection of salad bar equipment and supplies includes prep and serve totes so that you can chop, slice, and serve with one convenient dish. We also have aluminum serving bowls, salad bar crocks, condiment servers, and dispenser jars that are perfect vessels for holding salad dressings, toppings, and sides. Choose from a wide variety of accessories like ladles, spoons, and tongs, specifically made for use with salad bars. Our ice displays and beverage housings allow you to offer cold drinks, and you can place them on our portable work tables to keep them off the ground for sanitation and customer visibility.