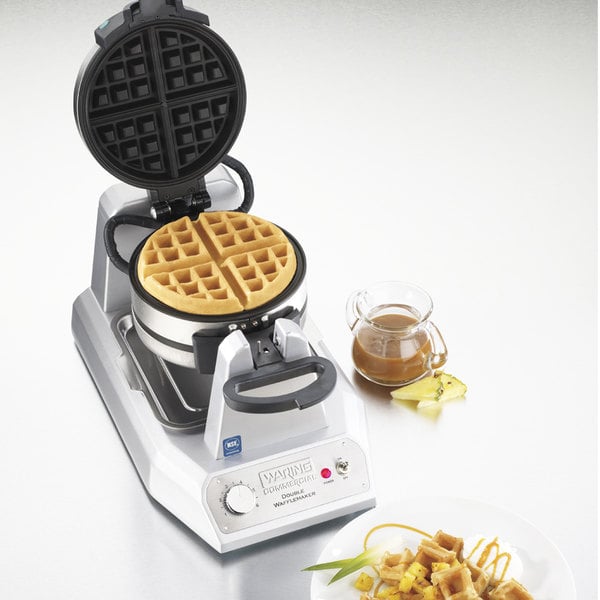 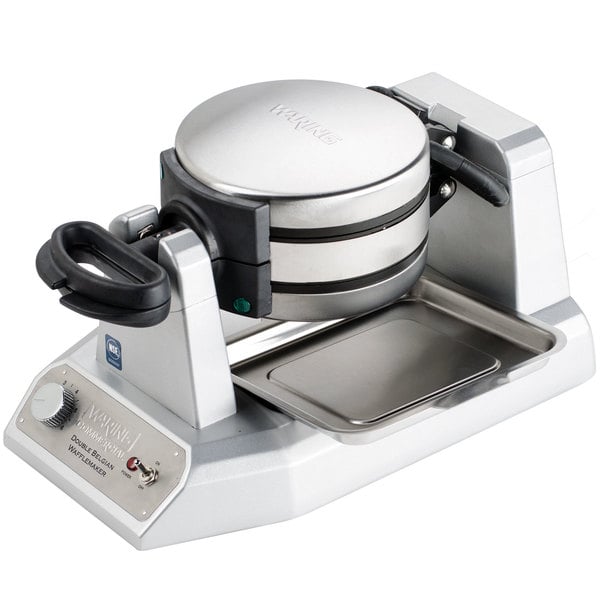 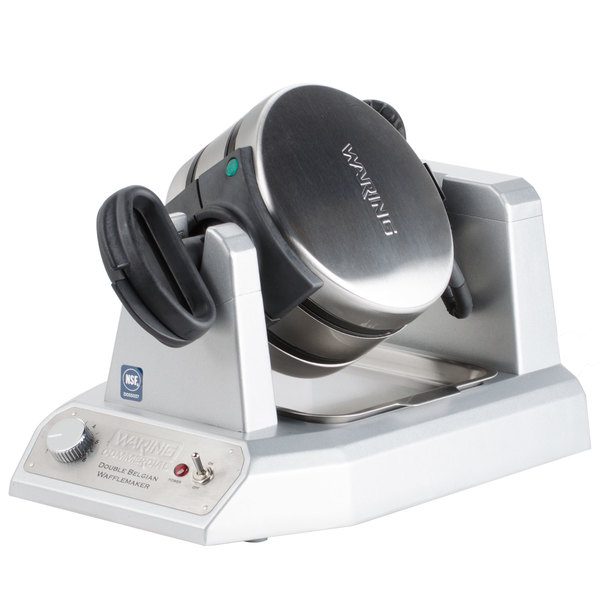 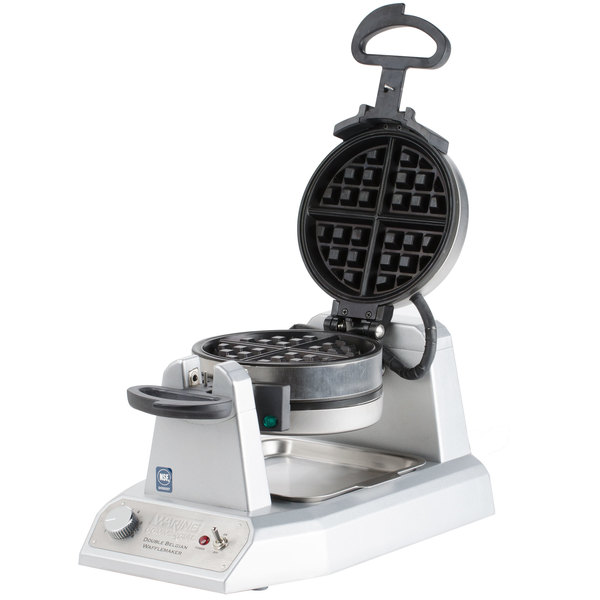 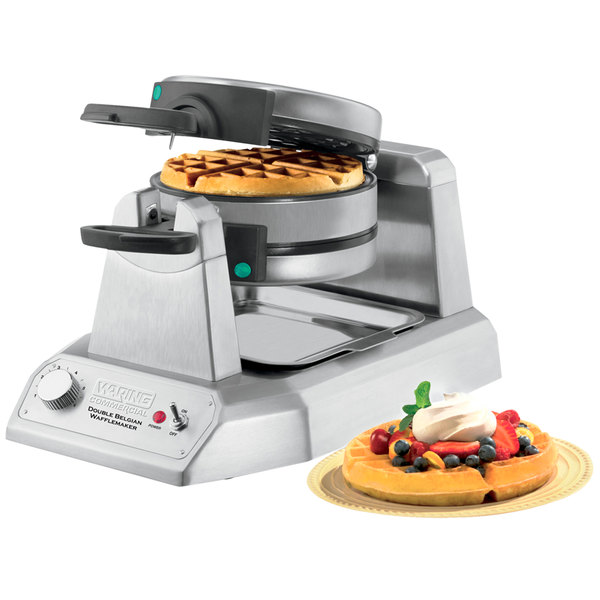 Perfect for your hotel, breakfast-style restaurant, or bed and breakfast, this waffle maker can make two waffles at a time for up to (50) 1 1/4" thick Belgian waffles per hour! It can also produce hash browns, thus making it versatile if need be. Durable, efficient, compact, and easy to operate, this machine will significantly improve the morning business hours at your establishment!

"When it comes to Belgian Waffles, Waring definitely delivers. In under 3 minutes, you get a perfectly cooked waffle that's soft and fluffy on the inside and crispy on the outside. Delicious!"

The Waring WW200 Belgian waffle maker comes complete with embedded heating elements that offer precise temperature control and quicker heat-up and recovery, cutting down the amount time that you need to wait between batches.

The waffle maker has independent ready lights, and audio beeps alert you when the heaters are ready and when the waffle is cooked. A manual dial controls temperature level.

You'll produce complete, aesthetically pleasing waffles each time thanks to triple-coated, nonstick plates, which ensure that you can smoothly remove each waffle without issue.

A 180-degree rotary feature ensures even baking and browning for all your waffles. Easily flip the housing as necessary with the sturdy, ergonomic handle.

This unit comes with a heavy-duty, die-cast base that can easily withstand the rigors of commercial environments.

This unit comes with a dishwasher-safe drip tray to place underneath the plates, as well as a pitcher for pouring batter.

Can I use oils or sprays on my non-stick waffle iron?
To prevent food from sticking to your non-stick surface, we recommend lightly coating it with oil, wiping off any excess with a soft cloth or napkin or using Vegalene Waffle-Off Grid Iron Release Spray. While other sprays can actually cause food to stick more readily, Vegalene Waffle-Off Grid Iron Release Spray is made to work with regular or non-stick waffle irons alike!

The Waring WW200 Belgian waffle maker has 1400 watts of power and triple coated nonstick plates, making it an efficient and easy-to-clean choice for your business. Check out this video to see the other great features this waffle maker has to offer!

Make and enjoy flawless waffles with the Waring Commercial Waffle Maker! Check out this short video of Executive Chef Fabrizio Bottero demonstrating just how easy the waffle maker is to use, and just how beautiful the waffles turn out.

Transcript Embed
An excellent choice for busy restaurants, diners, and breakfast bars, this Waring WW200 Belgian waffle baker uses 1400 watts of cooking power to make up to 50 mouthwatering, 1 ¼” thick waffles per hour! Its space saving, dual sided design features triple-coated nonstick plates that allow you to quickly and easily remove products without leaving any pieces behind. Each plate has embedded heating elements for precise temperature control, and its 180 degree rotary feature delivers even baking and browning every time. There is even an audible beep to let you know when the waffles are done so that you never overcook your waffles! The Waring WW200 non-stick double waffle baker has a heavy duty die cast housing to withstand rigorous commercial use. Its dishwasher-safe extra deep drip tray and non-stick plates make for a quick and easy cleanup. The waring WW200 Belgian waffle iron is 120volts and is ETL and NSF Listed. For bulk savings on batter, check out our selection of pancake and waffle mixes! Thanks for watching, and if you have any questions, please click on our live chat button.

Copy and paste the embed code above.
Transcript Embed
Hi, it's me again! Executive Chef Fabrizio Bottero introducing our new waffle makers from Waring Commercial. And look at this heavy-duty, di-cast construction. We have a single version of 1200 Watts; we have a double, vertical one of 1400 Watts. And now we're going to make two waffles in one single unit. This vertical unit allows you to make two waffles in one shot. The way it works it, when you turn it on, it'll beep when it's ready. You pour the batter in, and it will beep when it's ready to eat. So beep when it's ready to cook, beep when it's ready to eat. And now, we're going to make waffles at the same time. Look at how much space you can save. We're going to make one on the top, one on the bottom. Very easy to operate this machine. Here we go. We have the batter on the top one. I'm going to turn it. Beautiful browning embedded and we have a feature that you can turn it and it does a perfect browning on both sides. Put the batter in, and the second it's ready, it'll beep. And now we're turning it the opposite way. Very easy controls, even heat and by the way, the embedded heating elements in the roll-over feature really gives it a great baking and a beautiful browning. You're going to see the minute these are done. It'll beep, I'm going to open it up and show you exactly how beautiful these waffles are. Hear the beep? It's ready to eat! And also the green light will come on. So you turn it off, open it up. Gorgeous waffle, absolutely flawless. And now we have the bottom one, same thing. Turn it, voila! Ah you couldn't have a better job with less space anywhere. Some gorgeous raspberries, some beautiful blueberries, a little powdered sugar, and perfect! With the Waring Commercial Waffle Maker.

Resources and Downloads for
Waring WW200