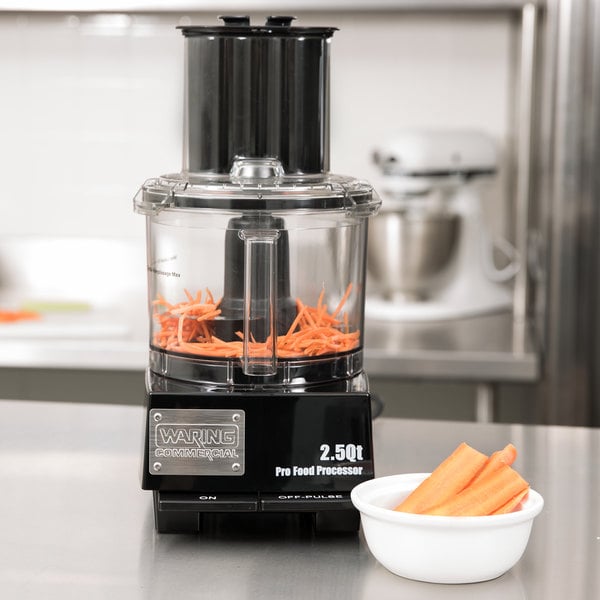 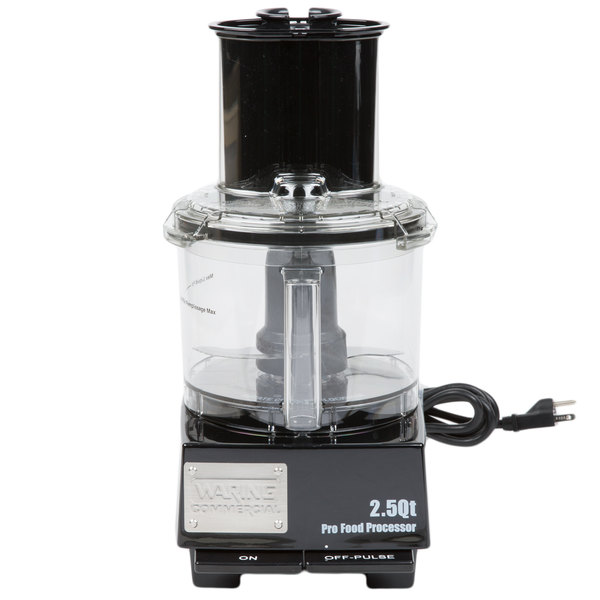 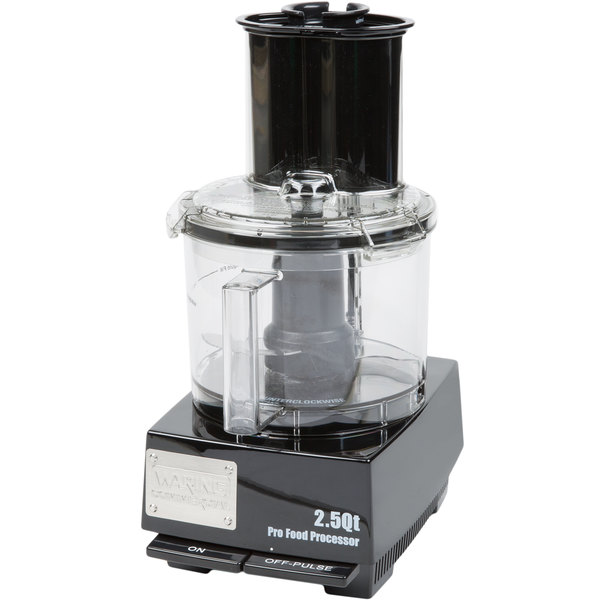 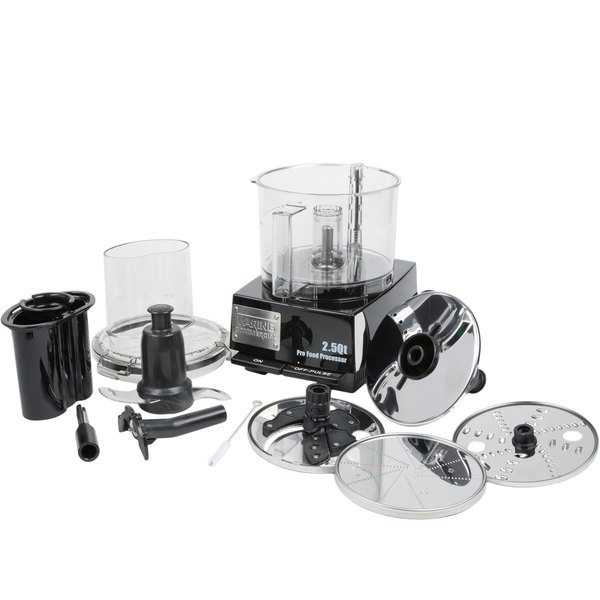 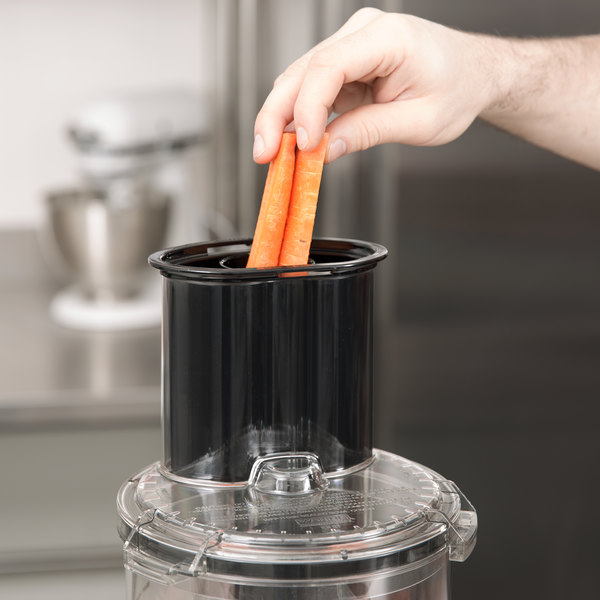 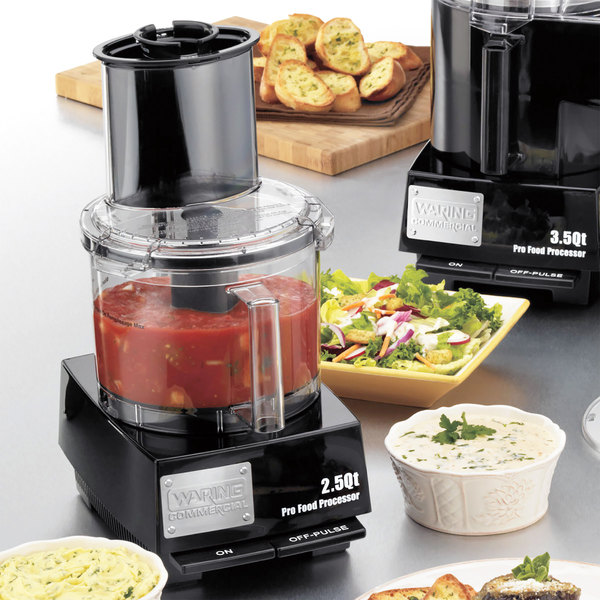 Looking for an efficient and economically priced food processor? This unit is your kitchen's solution for quickly chopping, mincing, pureeing, or liquefying! This food processor features a 3/4 hp motor with a 2.5 qt. sealed batch bowl so you can create soups, sauces, and a variety of other foods with ease. And thanks to the included pusher, you can easily press food into the blades for fast processing.

"Great food processor, makes quick work out of shredding cheese, cutting cabbage for coleslaw, or making salsa. Love it, blades are SUPER sharp so be careful. I use it daily for numerous things in my small restaurant."

An innovative LiquiLock seal system holds liquids in the bowl while processing and keeps the S-blade in the bowl while pouring. Its sealed, clear-view 2.5 qt. batch bowl easily processes soups, sauces, and marinades without leaks.

The high-impact and scratch-resistant polycarbonate material lets you easily see the bowl's contents. This way, you'll be able to monitor your products as they are being processed. Plus, its carbon steel metal drive shaft is designed for long-lasting durability.

This food processor comes with a sealed S blade, adjustable slicing disc, reversible shredding disc, a sealed whipping disc, and a variety of other blade attachments for outstanding versatility.

There are two large controls: "On" and "Off/Pulse." The food processor is set up with a safety interlock system, which prevents the unit from operating unless correctly assembled. To prevent the unit's motor from overheating, it also features an automatic reset switch. If your unit powers off during heavy use, simply turn the power switch off and unplug the power cord, allowing the unit to cool down for at least five minutes. Then, you can resume processing.

Once you're done processing, this unit cleans up easily. All blades and accessory discs are removable and dishwasher-safe, as are the batch bowl, cover, and food pusher.

Looking for a small commercial food processor for a variety of applications? The Waring WFP11S food processor is great for slicing, grating, whipping, and even preparing soups and sauces. Watch this video to learn more!

Chef Justin Bogle shares one of his favorite recipes in this must-watch video! With a Waring food processor and spice grinder, you can also make this dish for your establishment.

Transcript Embed
The Waring WFP11S is a fantastic small commercial food processor for a great price. The WFP11S features a 1 peak horsepower motor. It comes with a 2.5 quart batch bowl with a LiquiLock seal so that you can process soups sauces, dressings and other liquids without spilling. It comes with a 5/64” grating disc, an adjustable slicing disc, a serrated S blade, and a whipping disc that lets you make your own whipped creams and butters in seconds! It also comes with a 2 year parts and labor warranty, and 5 year motor Warranty. If you have any questions, please use our Live Chat button!

WARNING: This product can expose you to chemicals including Bisphenol A (BPA), which are known to the State of California to cause cancer, birth defects, or other reproductive harm. For more information, go to www.p65warnings.ca.gov.

Resources and Downloads for
Waring WFP11S

Light weight but works like a heavy duty one. Perfect for our smoothies we serve at summer food service program. Storage is great for our small.

The Waring WFP11S Food Processor with 2.5 Qt. Bowl - 3/4 hp is built tough and well. In the "light" category but powerful and heavy duty.

This has been my best find for our food truck. We shred a lot of cheese and this machine can chew through a block of cheese in no time flat. We also make our own salsa and this food processor leaves nothing un processed. The cleaning is a breeze. I have plans to order the larger one that has the continuous feed feature.

The Waring name has always been one we have respected in our operation and this little device does not disappoint. I got it as a time saving measure to save my staff from dicing celery, onion, parsley, and etc. and they have ended up finding about 100 other uses for it. When this one eventually dies I will go with a bigger model for capacity reasons, but I have nothing negative to say about this model particularly.

This food processor was a better investment than I had anticipated. We wanted a commercial quality food processor for use in the small kitchen in our nightclub but could not justify going with one of the more expensive heavier duty models. This waring unit came in well under budget and has ably handled every task we've thrown at it from chopping nuts to blending sauces.

Runs Smooth as silk - this Waring Cuisinart 2.5 qt. food processor with vertical chute is a high performer- I am very pleased with it.

The processor is easy to assemble and clean. It is used for whipping cream cheese as well as other items but only fairly whips the cheese.

This is a really great quality. We use it daily at our restaurant and it has held up very well. I would definitely recommend this food processor!

I mainly bought this for purée and grating, and it works just great! I also like it for chopping nuts when you need them to be a fine chop!

We love our new food processor. It arrived in perfect condition and meets all of our processing needs in the kitchen. We look forward to purchasing additional Waring products in the future.

nice, food processor, makes the work quiker. you can shred cheese, cabbage. you can chop nuts also. we use it alote. easy to clean. low buy.

Great food processor, makes quick work out of shredding cheese, cutting cabbage for coleslaw, or making salsa. Love it, blades are SUPER sharp so be careful. I use it daily for numerous things in my small restaurant.

This food processor is great for tackling multiple jobs in the kitchen. From pureeing soups, and sauces, it can also grate cheese and slice vegetables.

What a wonderful find! I love using food processors for everything from tomato soup to chocolate mousse and this one seems perfect for anyone to use.

We use this item to chop nuts, shred carrots and similar prep work. It comes with a "pulse" feature which is important to use for control as this is a high power processor.

Great processor , easy to clean, much tougher than previous processor that i have purchased and has already outlived many much more expensive processors that it was bought to replace

Great food processor for a small bakery. It does the job for my carrot cakes and chops up nuts perfectly for cookie and muffin recipes. Also very easy to clean.