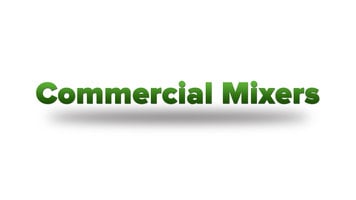 Learn how to use your Globe mixer attachments by following these step-by-step instructions! 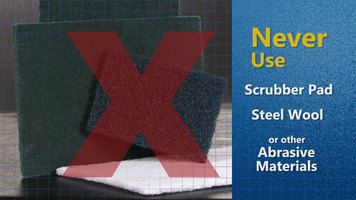 About Transcript Embed
Cleaning instructions. Always disconnect or unplug the electrical power from the mixer before cleaning. Dilute detergent per supplier's instruction. Do not hose down or pressure wash the mixer. Never use a scrubber pad, steel wool, or abrasive material to clean the mixer. Never use bleach, sodium hypo chlorite, or bleach-based cleaner. Always remove the agitator after each batch as the agitator can become stuck on the shaft and become difficult to remove. The entire mixer, including removable parts, must be thoroughly cleaned and sanititzed using the procedures identified by your local health department and the ServSafe essentials published by the Natural Restaurant Association Education Foundation (NRAEF). Visit www.ServSafe.com for more details. It is extremely important to sanitize the mixer and to follow the instructions on the quaternary sanitizer container to make sure proper sanitation is achieved. A capacity chart for Globe mixers can be found on page 17 of the instructional manual and is also available online at GlobeFoodEquip.com. This concludes the Globe training session for the Globe mixers. Detailed instructions for the items reviewed in this video can be found in the owners manual. Globe truly appreciates your business and we're confident that your new mixer will provide you with years of reliable service.

Effectively clean and sanitize your Globe mixer by following these simple instructions! It is extremely that you accurately clean your mixer and ensure it is up to your local health department's standards. 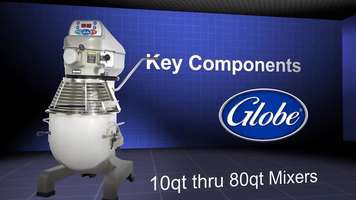 Learn the key parts of your Globe SP10-60 mixer with this informational video! By knowing each part and part name, you can accurately and efficiently run the machine. 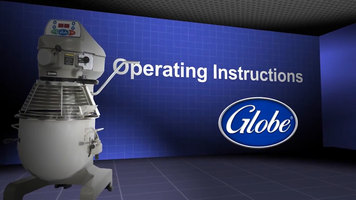 Learn how to operate your Globe mixer with these step-by-step instructions! 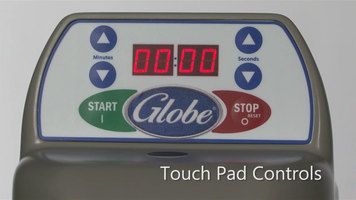 Easily control your Globe SP10-60 mixer with these step-by-step instructions! Each mixer features a digital display that can be adjusted to meet a desired mixing time.

Does free shipping apply if this item is shipped to a residential home?
This item is only eligible for free shipping to business or commercial addresses. Please contact our Customer Solutions team prior to placing your order if you have any questions!

This Globe SP60 60 qt. commercial stand mixer features a 3 hp, gear driven motor with three speeds so that you can power through any batch of ingredients! An ergonomic hand lever raises and lowers the bowl with ease, while an interlock system shuts down the mixer when the bowl is lowered for added safety.

Ready to use directly out of the box, the Globe SP60 stand mixer comes with a 60 qt. stainless steel bowl, stainless steel wire whip, aluminum spiral dough hook, aluminum flat beater, and a stainless steel bowl guard with an ingredient chute so that you can start mixing right away! For added convenience, it also boasts a #12 hub to accommodate additional attachments. The fixed speed transmission is made of heat treated, hardened alloy gears that provide high torque mixing power and quiet operation.

Resources and Downloads for
Globe SP60-1