Login or enter your email to be instantly sent the price! 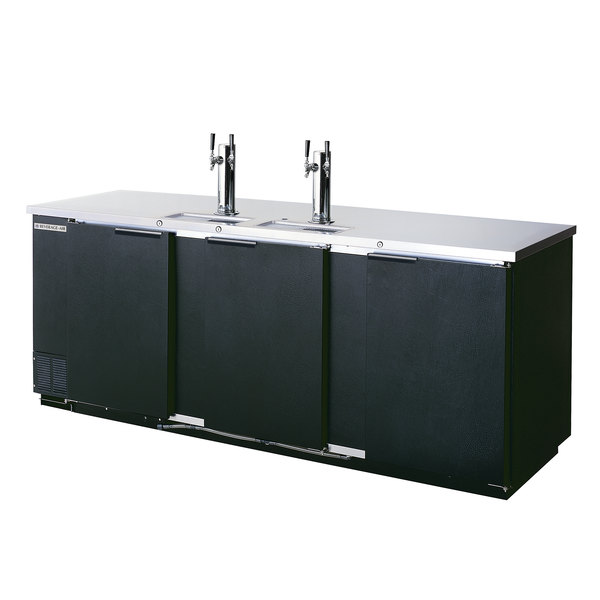 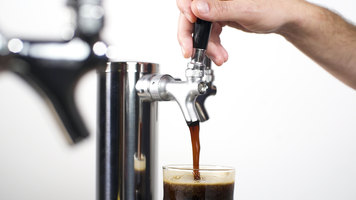 About Transcript Embed
A reliable beer dispenser is a must-have for any pub or bar. Beverage-Air offers a great selection of beer dispensers in a variety of sizes, all tested to operate in an ambient environment of up to 100 degrees Fahrenheit. Whether you’re looking for a compact unit or an oversized unit, this product line has something to meet your needs. Standard 28” deep and shallow 23” deep units are also available to best suit your space. Plus, on select models, the front-breathing compressor can be installed on either side; just specify which side at the time of purchase. Dispensers are available with either a black or stainless steel exterior and all feature a galvanized interior with a stainless steel floor. Standard units are built with a stainless steel top, though underbar models are available, as well. Available in either solid or glass, the doors are all outfitted with snap-in gaskets that are easy to replace and feature locks for security during off-hours. They’re also self-closing and field-reversible, with the added bonus of a 90 degree stay-open feature. A stainless steel drip tray is built-in beneath each dispensing tower, which are fully insulated. The units are easy to operate too, with a full electronic control and provided manifolds for immediate use. This series of beer dispensers uses environmentally-friendly R290 refrigerant, which has an ozone depletion potential of 0 and a global warming potential of 3. Beverage-Air beer dispensers are backed by a generous 3 year warranty and are proudly made in the USA.

Learn all of the ins and outs of Beverage-Air's great selection of Beer Dispensers! 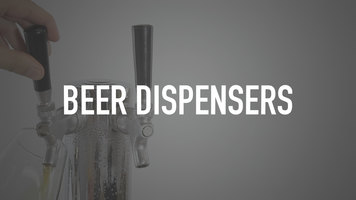 About Transcript Embed
Find the right beer dispenser for your business, and keep your customers coming back for ice cold beer on tap. We offer a large selection of products, including kegerators, back bar coolers, club top beer dispensers to meet your needs. So what is the difference between each of these units? Our commercial kegerators come with 1, 2, and 4 draft arms that can hold from 1 to 5 kegs. If you’re looking to serve draft beer as well as cans and bottles all in one place, we have combination beer dispensing and back bar cooler units. Many of these units have a glass door that provides your guests with a clear view of the bottles inside for excellent merchandising. Our club top beer dispensers feature enclosed spaces for keg storage. Unlike other units, they feature a convenient flip top refrigerated storage area that can be used to store chilled bottles and bar glassware. We offer beer dispensers in black and stainless steel finishes to suit your preferences. Some units are also Energy Star and NSF certified. Whether you have limited space or you are expanding your bar area, we have a beer dispenser for your application.

Learn the difference between commercial kegerators, back bar coolers, and club top beer dispensers. Coming in different sizes with various features, our selection of beer dispensers will allow you to find a unit that fits your specific needs.

Do I need to purchase any additional items along with this beer dispenser?
Yes, couplers, regulators, CO2 tanks, and gas hoses are all sold separately.

What size CO2 tank do I need for this beer dispenser?
The size of the CO2 tank you choose will be determined by the size of your beer dispenser unit and how often you are willing to refill the tank. Larger tanks will last longer than smaller tanks, but frequency and usage should also be taken into consideration. If you plan to store your CO2 tank inside the beer dispenser, then size will be a factor here since you will also need enough room to properly store your kegs. Your local beer supplier will be able to offer suggestions and show you the maximum tank size for your dispenser.

Can I order this beer dispenser with a customized number of taps?
Yes, Beverage Air offers a variety of customization options that you can choose from to best suit your needs. Please contact [email protected] with any questions you may have.

What does the “H” or “HC” mean in the newer Beverage-Air model numbers?
This is a representation that the unit is using a “Hydrocarbon” refrigerant. This would include both R290 and R600a refrigerants. They are being used as an eco-friendly refrigerant by Beverage-Air in response to the EPA’s Significant New Alternatives Policy (SNAP) Program. Read more about this program in our blog post on Refrigerant Regulations.

Does Beverage-Air warrant this item for use in a food truck?
This item is covered under Beverage-Air's warranty contingent upon the unit being kept in a controlled climate. This means that the interior of the food truck may not be susceptible to extreme high or low temperatures. If warranty service is required, the truck must be able to sit stationary for 24-48 hours to allow for a technician to service the equipment.

Thanks to its heavy-duty forced air refrigeration system, this Beverage-Air DD94HC-1-B-069 (2) triple tap kegerator beer dispenser helps you serve the coldest beer in town. This kegerator makes it easy to serve your patrons cold, refreshing, perfectly drafted beer. This kegerator can hold (5) 1/2 size kegs. Boasting a durable, steel construction with a wear-resistant black vinyl finish, this kegerator withstands the daily demands of your busy bar, pub, or catered event. The top is made of heavy-duty stainless steel for easy cleaning and maintenance. Plus, the drip tray helps contain liquid for a clean, mess-free operation.

Self-closing doors with magnetic gaskets ensure the doors seal tightly each and every time to keep kegs at the proper temperature. This unit also comes equipped with standard door locks to keep your inventory secure after hours and between keg replacements.

This beer dispenser's 1/3 hp compressor runs on eco-friendly R290 refrigerant. This specialized refrigerant has an ozone depletion potential (ODP) of 0 and a global warming potential (GWP) of 3, making it an environmentally-responsible choice for your business. It is insulated with CFC- and HCFC-free foamed-in-place polyurethane that both increases its energy efficiency and structural strength. This unit requires a 115V electrical connection. The manifold/distributor and beer lines are included.