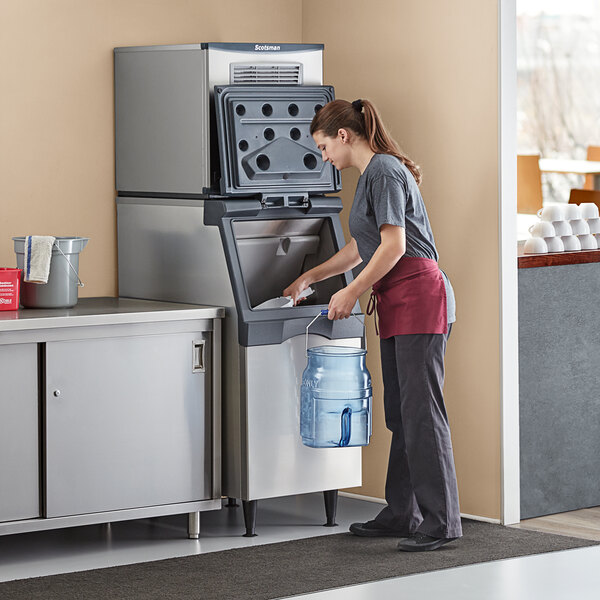 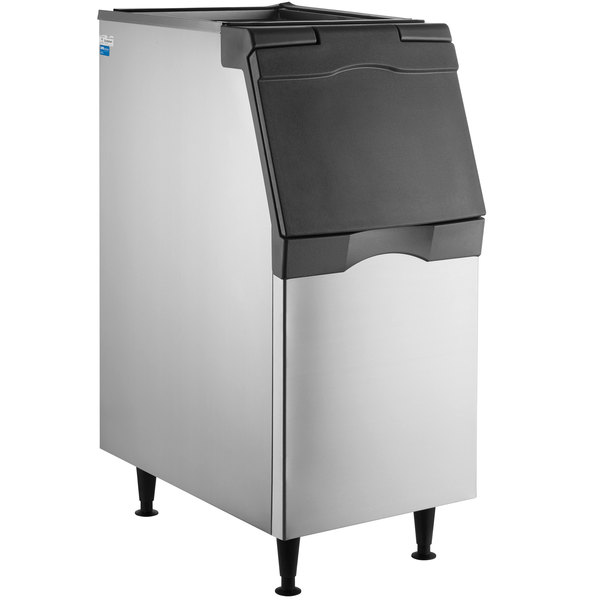 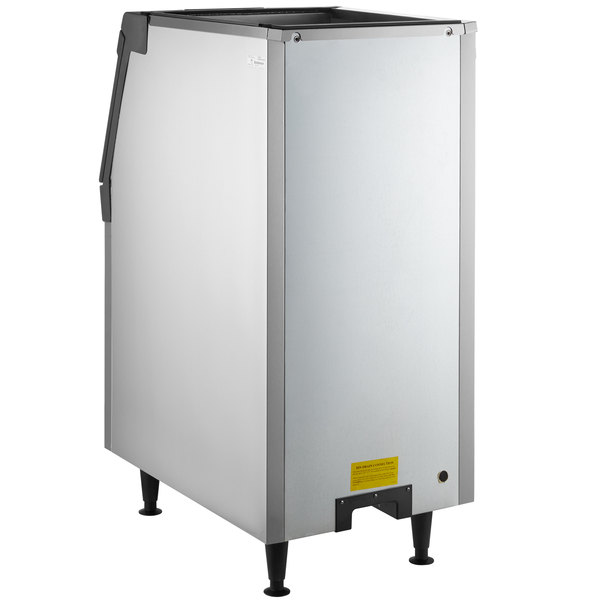 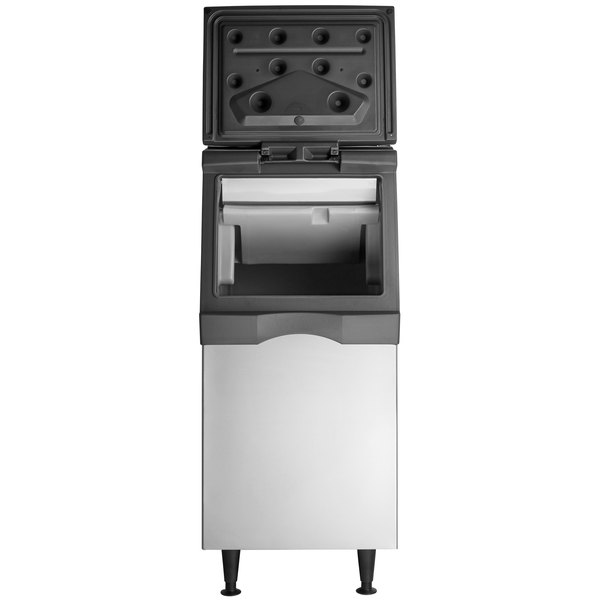 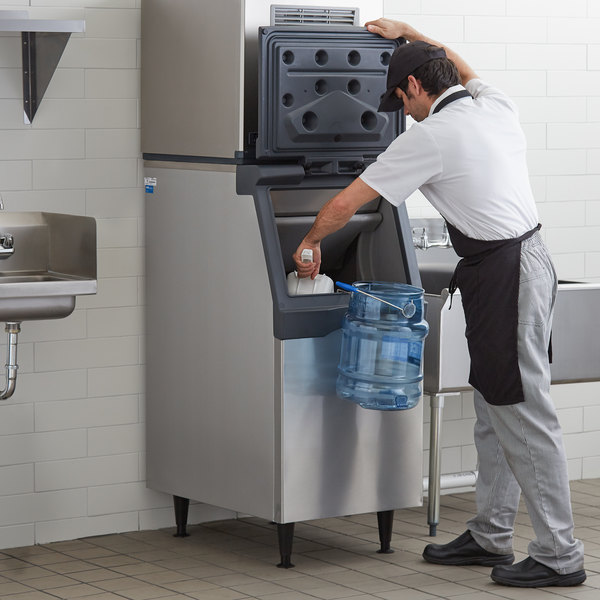 Make it easy to scoop and use ice from your ice machine with this Scotsman B322S ice storage bin 370 lb. stainless steel exterior.

A perfect match to the 22" Prodigy cube ice machines and other Scotsman 22" ice machines (both sold separately), this bin is designed to fit perfectly on top. On the back it has a rear-located, recessed drain that makes this a breeze to install or clean. The baffle is also easy to remove so you can maintain a clean set up over time. With the help of this bin, you can make sure there is always ice on hand to meet the needs that arise in your establishment.

"Awesome ice bins. Hold a ton of ice and no leaking. We have 2. They are slim and fit our Scotsman Prodigy makers. Love the slime profile."

This bin has a spring loaded door with hidden hinges that is easy to open and close.

The built-in scoop holder ensures that your ice supply stays sanitary for use.

With its stainless steel and polyethylene construction this bin has a sturdy design. Since it is corrosion-resistant, this model is sure to withstand the daily wear and tear of your business. At the same time it is lightweight so you can easily move the bin when necessary.

Additionally, adapter and deflector kits can be used to match up ice machines with other types of bins / dispensers. When available, literature from the manufacturer regarding bin/ dispenser / machine compatibility and adapter / deflector kits is also included on our product pages and is kept as up-to-date as possible. If you have any questions, our Customer Solutions team is also happy to help!
Does this ice bin / ice dispenser come with an ice machine?
No, this product must be paired with a compatible ice machine for ice production.
How long does it take this ice machine or ice bin to ship?
*Because this ice machine is stocked in WebstaurantStore warehouses, we are able ship orders placed before 12:00 PM EST on Monday through Friday within 4 hours. Due to carrier pick up schedules, any orders placed after that time will ship the following day. If the unit comes with both an ice machine and an ice bin, the two components will ship at the same time.

Transcript Embed
What we're gonna do here, guys, is I wanna introduce you guys to Scotsman ice machines and what they're doing. People don't realize how important of an ingredient ice is in the cocktail. So the cocktail is an American invention, okay? It was invented in 1806, it's a defined term. So when you think about the culinary world, Japan's known for sushi, the French are known for their culinary techniques, and then America's known for being the inventors of the cocktail. And the cocktail is defined in 1806 as sugar, water, spirit, and bitters. And one of the most important ingredients of the cocktail is the water. Now what's the water? It's the ice, guys. So the ice is the most important ingredient that goes into a cocktail. If you think about it, what is the one ingredient that's in every cocktail? Ice. So ice is specifically very important and Scotsman's been around since 1921 as far as making ice machines and for 50 years they've been in the residential aspect of this, and they've really perfected what they're doing. So I really enjoy being able to work with them on this. And I'm gonna show you a couple of different kinds of ice cubes and we'll make a couple cocktails. We have a couple of different types of ice cubes that we're working with here. First, is this nugget ice. You guys all know what this is right? Everybody that's been to Sonic. This is a very iconic ice. Now when we make cocktails and when we're doing this, we're trying to make sure that we take you to a place. A cocktail is a visceral experience, it's a piece of my heart whenever I make it for you. Now what's amazing about this ice is that no one else can do this ice. This ice, it takes on flavor, it seeps in the flavor, and so it actually holds flavor so that you are able to kind of chew it up after. It is the original chewable ice. Okay guys, the other style of ice that we are doing is the original cubed ice. Beautiful, colorless, flavorless, crystal clear ice cube, right? Pretty damn sexy. Cool, yeah? It's alright to say yes. So I'm really lucky to be working with these guys, it's such an iconic ice that's been around since 1921. They have perfected the residential market for the past 50 years and they're just killing it. Killer company, killer people, and they have a killer product. So when you think of the most important ingredient that's in a cocktail it's the ice. The ice goes into every single cocktail, right? Even more than any other ingredient that's behind the bar. Besides my love.

Copy and paste the embed code above.
Overall Dimensions:

Resources and Downloads for
Scotsman B322S