Get Eco-Friendly Disposables with GreenBox

Founded in 2009, GreenBox offers eco-friendly choices to pizza shops across the country. Their signature product is a pizza box that breaks down into four plates and a folding to-go box. It was originally inspired by one of the co-founders, William Walsh, who would rip up pizza boxes to use them as plates when he was in college. Read more

Showcased on “Shark Tank,” GreenBox pizza boxes became an environmentally-friendly sensation. They’ve been featured on dozens of talk shows and took social media by storm. Not only do these boxes create less waste than traditional boxes, but they’re also made of 100% recycled, recyclable corrugated cardboard. 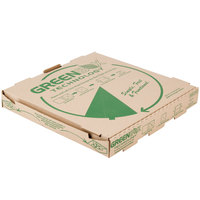 GreenBox pizza boxes and accessories are made of 100% recycled cardboard and come in a variety of sizes to fit every pizza.