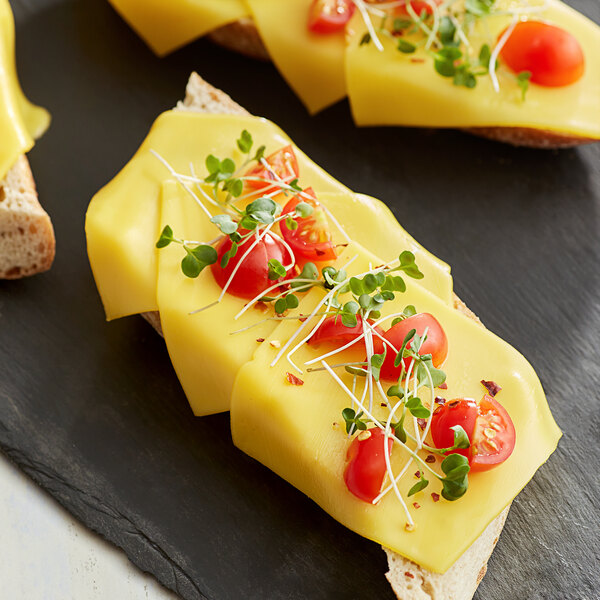 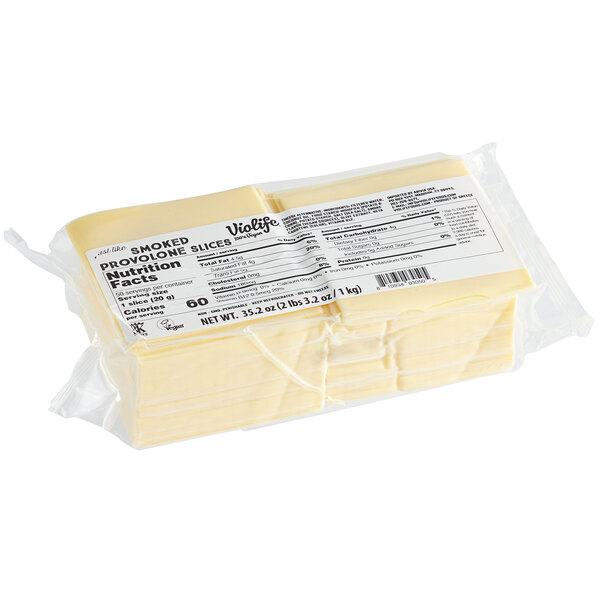 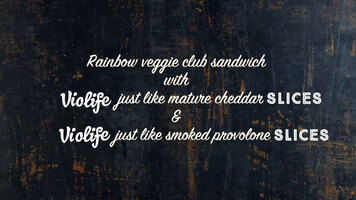 First, grab two slices of Violife just like mature cheddar and two slices of Violife just like smoked provolone. Then, combine the avocado, lime, coriander, salt, and pepper in a small bowl. Next, slice your orange pepper, zucchini, and aubergine. Season with oregano, salt, pepper, and olive oil, and bake for twenty minutes at one-hundred and eighty degrees Celsius. Then, assemble your sandwich. Spread the avocado mixture onto a piece of sourdough bread, then add Violife mature cheddar slices, tomato, and your roasted aubergine, and top with a slice of sourdough. Then, spread mustard onto the top slice, followed by roasted zucchini, Violife just like smoked provolone slices, roasted orange pepper, and another slice of sourdough bread. Top the sandwich with pickles, and enjoy!

Indulge the vegan, plant-forward, and dairy-free diet consumers in your establishment with a rich, creamy cheese alternative by serving this Violife Just Like vegan sliced smoked provolone cheese. This plant-based, vegan sliced cheese is a delicious and environmentally-friendly addition to your menu! Crafted to offer the same flavor, texture, and satisfying meltability as conventional provolone cheese, this product is a great option for your vegan customers or for those with dairy allergies. This product offers a classic, salty cheese taste with the perfect balance of smokiness and richness! It's also free of most major food allergens, so you can serve this plant-based provolone cheese with confidence at your establishment.

As more and more consumers come to expect vegan and dairy-free offerings in the establishments they frequent, it's essential to keep your menu updated with great-tasting plant-based appetizers, entrees, and desserts. This 2.2 lb. package of plant-based provolone cheese offers an easy way for you to swap out dairy in your existing recipes in large quantities without compromising on taste and texture! Melt it on top of your signature veggie burgers or sandwich it inside a classic grilled cheese to create satisfying, savory options for your vegan customers and those with dairy allergies. Or, bake it with herbs and juicy tomatoes for a smoky and delicious dip! It's an easy way to provide a dairy-free option that pleases the palate just as well as the original. No matter the application, this Violife plant-based vegan provolone cheese is sure to satisfy vegans and cheese lovers alike!

Plant-based eating is a wholesome dining alternative that's here to stay. As more consumers continue to prioritize their personal health and the health of the planet, Violife Foods aims to aid in expanding the plant-based offerings on your menu. Produced in Greece without any animal products, dairy products, or GMOs, Violife cheese alternatives provide the expected melt, stretch, creaminess, and tang that consumers enjoy from traditional cheeses without any compromise. From shreds, to slices, to spreads, their plant-based cheese products offer irresistible flavor and texture that makes it easy to create dairy-free meals that your customers will rave about. Made to be enjoyed by everyone, Violife keeps healthy lifestyles and environmental harmony in mind, making their products a great way to appeal to health- and eco-conscious customers. Check out their line of 100% vegan, plant-based cheeses to find the perfect dairy-free substitute for your menu!